A belvedere looking out on the city

The goal of the La Part Dieu shopping centre regeneration project is to improve the way it connects with the city and make it more outward-oriented, while providing new shops, leisure activities and restaurants. Its redesign will create a “new generation” shopping centre and improve the reputation of the city.

La Part-Dieu shopping centre has been one of the most dynamic centres in Europe for 40 years. It has 240 shops and restaurants and is visited by 35 million people every year.  The centre is currently seen in the district as a “closed box”. A major challenge of the project is to open it up to the street and create a connection with the city, by working on its accessibility, lighting, and creating an outward aspect. Designed by the Dutch architects MVRDV, the project plans the addition of 80 retail outlets and a multiplex cinema with 18 screens.

The key features of the project

The existing façade will be renovated and the design reinterpreted to maintain the identity of La Part-Dieu district. A continuous pattern of interlinking rectangles will be developed on the newly built areas and will “vanish” at the different entrances.

A “suspended square” on the roof

The large roof terrace space, currently used for parking, of the building will become a huge “suspended square” providing cultural and leisure activities, as well as restaurants. This redevelopment will provide a new urban belvedere and restore open living spaces with greenery to its users.

An extension to the south

An extension will be built along the redeveloped Rue Bouchut, at the entrance to the Cuirassiers carpark.

The new shopping centre will feel like a hill in the centre of the city. 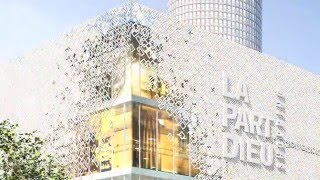