The first HQE*skyscraper in France

A new landmark on the Lyon skyline, the Incity tower is now the tallest high-rise in the city. The Caisse d’Epargne Rhône Alpes and management offices of the TER and SNCF have been located there since March 2016.

Built on the old site of the UAP tower, the Incity tower is the first HQE (French high environmental quality standard) city centre skyscraper in France. 200 metres high, it is now the tallest building in Lyon, ahead of the Part-Dieu tower and the Oxygène tower, and the 3rd tallest in France, behind the First tower in Paris La Défense and the Montparnasse tower, also in Paris. It is topped by a 50 metre mast. This new landmark on the Lyon skyline has become one of the symbols of the reinvention of La Part-Dieu and offers a magnificent view of the city of Lyon.

* In the city centre. 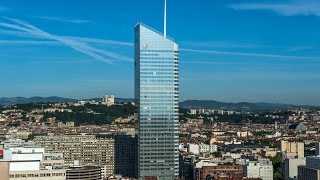