Rue Garibaldi was designed as an “urban motorway”, in the 1960s. This is a strategic road crossing to the East of the city. Traffic calming and the planting of greenery transformed this large avenue, when work began in 2012. Travel on foot and soft transport methods are encouraged and enhanced.

The project has transfigured the way the urban environment is divided up, offering a “green lung” at the centre of the city:

Nearly 800 m long, this section of rue Vauban and rue Bouchut was the first to be reorganised between 2012 and 2014. It was given a public transport lane, a planted pedestrian walk and a cycle path. This created a better balance of public space in favour of sustainable transport. The work is ongoing with the completion of the new Renée Richard square located in front of the Paul Bocuse indoor food market in autumn 2016. A second phase of developments will be carried out on Rue Bouchut extending as far as Rue d’Arménie, in which the tunnel will be replaced by an open air crossing. Ultimately, vehicles will drive on three lanes on the surface, one of which will be for public transport. 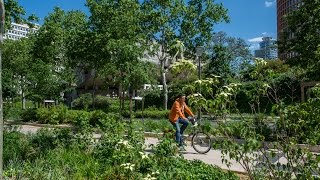